Preparation of iridescent films and reflective pigments from cellulose

The chiral nematic order in the suspension is partially retained when the water evaporates, leaving iridescent chiral nematic films of cellulose I. The reflected colour can be controlled by changing the electrolyte concentration in the suspension. We end up with an iridescent film that is essentially pure cellulose.
["Solidified Liquid Crystals of Cellulose with Optically Variable Properties", J.-F. Revol, L. Godbout and D.G. Gray, United States Patent 5,629,055 May 13, 1997 (to Paprican)]. 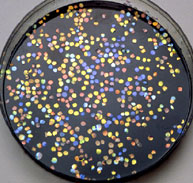 The factors governing the final iridescent properties are complex. The source of the chiral interactions that govern the reflection wavelength is controversial, and it has recently become clear that other phenomena such as gel and glass formation during the drying process also govern the final colour.

Shear deformation and mass transfer during evaporation may also influence the structure of films prepared by evaporation of water from cellulose nanocrystal suspensions.